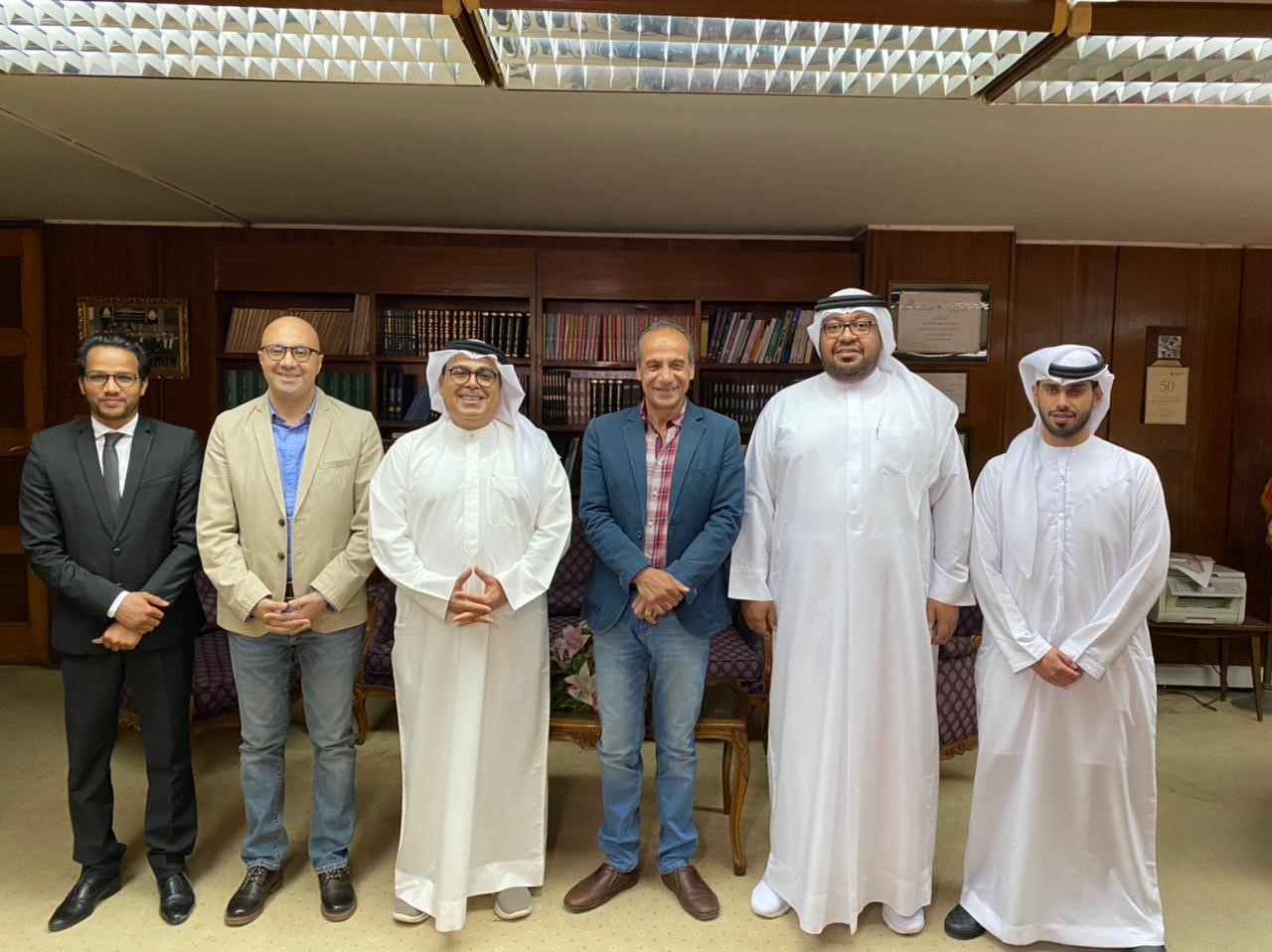 As part of the tireless efforts of the Sharjah Institute for Heritage, on the sidelines of its participation in the 52nd edition of the Cairo International Book Fair, the institute’s delegation headed by His Excellency Dr. Abdulaziz Al-Musallam visited the Egyptian General Book Authority, and they were received by His Excellency Dr. Haitham Al-Haj Ali, Chairman of the Board of Directors and Dr. Ahmed Bahey El-Din Al-Asasy, Vice President of the Authority

His Excellency Dr. Abdulaziz Al-Musallam said that the Sharjah Institute for Heritage was able, within a few years, to achieve many important achievements in the fields of cultural heritage, whether at the academic level, or in the field of studies and publication, or through the programs, events and activities that it organizes throughout the year. This contributed to enhancing cultural awareness of heritage, and being open to various pioneering and distinguished cultural and scientific experiences, which resulted in a lot of quantitative and qualitative accumulation of the Institute’s outputs.

He pointed out that the efforts made by the Institute in the field of publishing contributed to the sponsorship, support and dissemination of many cultural and heritage projects, including the Thesaurus of Intangible Cultural Heritage in the Arab World, the Emirati Encyclopedia of Handicrafts, Professions and Industries, a glossary of tools in the Emirati heritage, and a glossary of terms in heritage Al-Omrani, the Encyclopedia of Popular Sayings and Proverbs in the Arabian Gulf, and other works that contributed to documenting the Emirati and Arab heritage, pointing out that the Institute looks forward to opening up to more spacious, wide and comprehensive fields, in cooperation and partnership with cultural and scientific institutions and bodies, in order to make its publications widely available. .

He stressed that the efforts made contributed to the publication of more than 300 titles in various fields of cultural heritage, history, literature, anthropology, and other topics, including books, series, magazines and publications that were widely accepted and popular.
Al-Musallam, accompanied by the delegation accompanying him, which included Mr. Ahmed Al-Bairaq, Director of the Institutional Communication Department, Mr. Ahmed Al-Dah, Head of the International Relations Department, and Dr. Mona Bounaama, Director of the Content and Publishing Department, were briefed on the efforts of the Egyptian General Book Authority in the areas of publishing and distribution, and what they had achieved. The authority is in this field to make books available to the audience of readers, especially through popular editions at nominal prices, available in the various distribution outlets of the authority, and in the book fairs that it organizes throughout the year inside Egypt, and the exhibitions in which it participates outside Egypt.

Al-Musallam discussed, with the head of the Egyptian General Book Authority, ways of joint cooperation in the field of publishing, translation and distribution. To be formulated within the Memorandum of Understanding, it included many aspects, including cooperation in publishing popular editions of the Institute’s publications, distributing them in the Authority’s outlets, and electing topics from cultural heritage by agreement between the two sides, with the publication of anthologies and series from the mothers of Arab heritage, in addition to the translation of some works important heritage, and other matters that will be included in the memorandum of joint cooperation.
Dr. Haitham Al-Hajj praised the efforts of the Sharjah Heritage Institute in the field of book-making and publishing, stressing that this cooperation and partnership will contribute to strengthening cooperation between the two sides, advancing publishing and its industry, and making the book available to readers in the United Arab Emirates, the Arab Republic of Egypt, and abroad, through The Authority's approved ports.