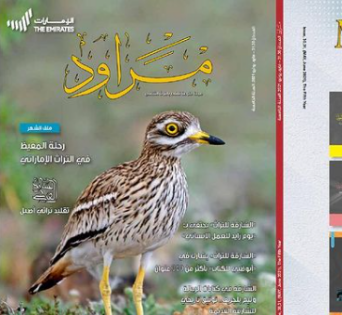 The double issue (30, 31) of Marawad magazine was recently issued by the Sharjah Institute for Heritage, which includes rich and varied topics, cultural and heritage. The new issue of the magazine celebrated the summer season and its beautiful omens, starting with the activities of the fourteenth session of the Good news of the heat, and then ending with a comprehensive file An integrated review of the manifestations of the hot season in the Emirati folklore.

His Excellency Dr. Abdul Aziz Al-Musallam, Chairman of the Institute,, started the talk, in the introductory edition, about the good news of the heat and its season and what it symbolizes in the Emirati heritage, and said: “The good news: It is the good news that the informant does not know, and the good news is what it gives him.” The missionary, the plural glad tidings, the glad tidings of tambourines, and the like, and the Emiratis have used this meaning in many of their literature, as mentioned in their poems and tales.

His Excellency added: "The people of the United Arab Emirates knew the 'good tidings', which is the tidings of the first pollen of the dates. If the date palm throws its first fruit out of the wet in the form of 'two quarries or two neighbors', they say 'good tidings', and they communicate with it, and they are very happy. He stressed that the hot season, in the Emirates, does not pass through the fruit of one fruit, which is the wet, but rather the omens are many, there we find loumi, hamba, fifa, tarni, shakhak, and other summer fruits, and there are insects and birds that adorn the environmental scene, such as the sarnakh, which is a cicada. The harvest that resounds with its musical voice, then the pigeons of al-Raabi, the willows, and Bu Bashir, the beautiful dragonfly, as well as the ball, which is the frog of valleys, trenches, and galleries (i.e., the pooled water), and other things that are imprinted in the memory, and they will never be forgotten.”
Raising awareness of the Emirati heritage and instilling its values in the hearts of children

For his part, Dr. Mona Bounama, Director of Content and Publishing Department, Managing Editor, spoke about the importance of the heritage and cultural programs organized by the Sharjah Institute for Heritage, and their role in promoting awareness of Emirati heritage and instilling its values and ideals in the hearts of children, young people and the target audience. Among those events: Four Major events: (Sharjah Traditional Crafts Forum - Sharjah Heritage Days - Sharjah International Narrator Forum - World Heritage Weeks in Sharjah), in addition to national events and events: (National Day - Martyr's Day - Flag Day - Emirati Women's Day - Tolerance Day), And the popular: (Haq Al-Laila - The Good News of the Wrath), and the global: (International Coffee Day - International Day of Audiovisual Heritage - International Day of Happiness), and the monthly cultural program, which includes scientific seminars, panel discussions, and artistic and educational workshops.

He stressed that what distinguishes these programs, events and activities and strengthens their impact and impact is that they are generally characterized by accumulation, richness and diversity. These programs benefited from the quantitative and qualitative accumulation they had achieved over the previous years, since the Department of Heritage and Cultural Affairs was responsible for this field.