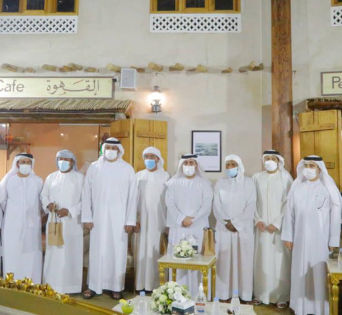 Sharjah Institute for Heritage organized the Khorfakkan branch, Recently, ramadan session, BTitle "Ramadan time"The researcher, Fatima Al-Mughni, and the researcher and poet Abdullah Al-Hamour spoke in it. Where The session, moderated by the media, Maryam Alai, focused on the Aesthetics of the month of Ramadan and what it accompanies from the customs and traditions of the past.

And they attended the session, which was met with lively and remarkable interaction. Happiness Issa Hilal, Chairman of the Sharjah Sports Council, Sultan Al Mansouri, Director of the Emiri Court in Khorfakkan, Muhammad Khamis Al Naqbi, Deputy Wali of Shees, Shatha Alai, Member of the Federal National Council, Dr. Abdullah Al Balushi, Member of the Advisory Council in the Emirate of Sharjah, Sami Al Naqbi, Chairman of the Guardians Council Student affairs in the city of Khorfakkan, Mr. Khaled Al-Shehhi, Director of the Institute’s branch in Khorfakkan, And a number of directors of departments, and staff of the Institute.

Values A rich cognitive heritage
Khalid Al Shehhi, Director of Sharjah Institute for Heritage, Khorfakkan Branch, said::" The Ramadan session came within the agenda and plan of the branch consistent and emanating with the agenda of the Institute, which covers various practical, field, academic, scientific and cognitive fields, as the Institute is keen to be present in the holy month through events, programs and activities appropriate for the month of Ramadan. Ramadan, and achieve their purpose to provide Values A rich knowledge heritage for the followers, attendees and the new generation, which contributes to emphasizing the role and efforts of the Institute for the preservation, preservation and transmission of heritage for generations.

He pointed out that the session met with a lively and remarkable interaction by the attendees and participants, and they constituted an added value to the information that the Ramadan session touched upon through their interventions and questions..

The researcher and poet Abdullah Al-Hamour also reviewed the general literary, poetic and heritage scene that was present during Ramadan, and how the Ramadan evening sessions and councils turn into open seminars and stations for science and knowledge and vital interaction between everyone.