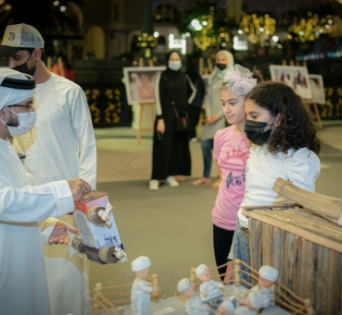 Within the activities of Ramadan Nights at Al Qasba organized by the Sharjah Investment and Development Authority (Shurooq), which coincides with Zayed Humanitarian Day, and coinciding with the year of preparation for the fiftieth year, the Sharjah Institute for Heritage is participating in the presentation of Emirati folk games and an exhibition of portraits of the late Sheikh Zayed bin Sultan Al Nahyan. May God rest his soul, to promote the path of goodness and giving.

The events will last for four days, from April 28 to May 1, and include an ideal time for family gatherings and friends, and enjoying a range of exhibitions and colorful lighting shows throughout Al Qasba.

Zayed Day for Humanitarian Action is a milestone in the history of the country
His Excellency Dr. Abdul Aziz Al Musallam, Chairman of the Sharjah Institute for Heritage, said: “We are pleased to participate in this beautiful Ramadan event organized by the Sharjah Investment and Development Authority (Shurooq), and Zayed Humanitarian Day represents a milestone in the history of the country, and in charitable and humanitarian work. Love, giving and loyalty to the good Zayed, and it is a great and vital opportunity to emphasize the set of human values ​​and principles established by Sheikh Zayed, may God rest his soul, as he was a man of governance, politics and benevolence who sought throughout his life to build the UAE and achieve the prosperity of the Emiratis, and this had a great impact on the development of the state, which occupied a great position among the countries of the world. Education, health and urbanization have had a profound impact on the state and its performance.

His Excellency added: "Humanitarian work occupied a large part of his thinking, may God have mercy on him, as his contributions reached all parts of the world, and he was known in the east and west of the earth as the good bidder, as an expression of his white hands and his charitable works that included the peoples of brotherly and friendly countries. He was always keen to provide a helping hand to all people and draw a smile on their lips."

Dr. Al-Muslim continued: “Through the photo gallery, we remember an exceptional man who lived among us, and still lives in our hearts. He taught us good, peace and happiness in a strong homeland that formed a model of unity and union, and became a model in the world, and he is still present among us through The rational leadership that completes the journey of goodness and humanity that Zayed Al Khair drew.”

Dr. Al-Musallam thanked and appreciated the Sharjah Investment and Development Authority (Shurooq), for its efforts and role in various fields in general, and in this event, which will be a station for knowledge, entertainment and enjoyment of spending the best times during Ramadan nights.

Featured post
The exhibition of the Sharjah Institute for Heritage includes pictures of the journey of the late Sheikh Zayed bin Sultan Al Nahyan, may his soul rest in peace, the founder and builder of the UAE. Children in the past to entertain themselves, which with the passage of time has become a tradition in the United Arab Emirates.