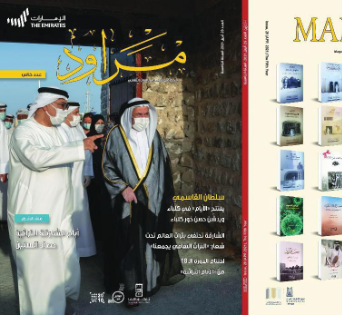 The Sharjah Institute for Heritage has issued two new issues of “Maroud” magazine, issues 28 and 29; To celebrate the world heritage in Sharjah and the Sharjah Heritage Days, Dr. Abdulaziz Al-Musallam, President of the Sharjah Institute for Heritage and Editor-in-Chief, addresses, within the contents of the 28th issue, the role of World Cultural Heritage Weeks in promoting cultural communication and civilized dialogue with different cultures, through the countries that Hosted by Sharjah at World Heritage Weeks, which are held every month.
Al-Musallam stressed that the World Cultural Heritage Weeks are at the heart of the enlightened vision of the Sharjah Cultural and Heritage Project, led by His Highness Sheikh Dr. Sultan bin Muhammad Al Qasimi, Member of the Supreme Council of the Union and Ruler of Sharjah, who supports heritage and is the custodian of culture and its affairs.
The issue also dealt with the institute’s news and the events it organized during the last period, including seminars, lectures and virtual workshops, including “Sharjah Communicates with the Cultures of the World” by Aisha Ghabish, “Authorization Methods in Interpreting Dreams in the Arab Heritage” by Ali Al-Abdan, and “Features from the Dibba Heritage” Al-Hosn by Dr. Abdullah Al-Mughni.
The issue contains “The Art of Al-Nahma” by Ali Al-Ashr, “Al-Tajfeer.. Cutting the Trace” by Ali Ahmed Al-Mughni, “Ayash Yahyaoui.. Al-Arabi who loved the heritage of the Emirates” by Muhammad Abdullah Nour Al-Din, and “A glimpse of the dialect of the Al-Awazim tribe in Kuwait” by Talal Saad Al-Rumaidi, "Friends' Book" by Asma Al Zarouni, and "Training Workshops Specialized in Folklore" by Fahd Ali Al-Maamari.