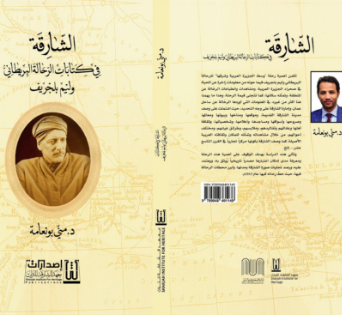 The Sharjah Institute for Heritage recently published the Sharjah Book in the Writings of the British Traveler William Belgrave, authored by Dr. Mona Bonameh. The book consists of three chapters, an introduction and a conclusion. The first chapter dealt with the concept and context, reviewing in its multiplication the importance of the trip and its benefits, and the most prominent travelers who visited the region During the nineteenth century AD, he also stopped at the historical importance of the traveler's books, and whether they could be considered a reliable and reliable historical source.

The author also referred to Western travelers who flocked to Sharjah, or passed through on their way, and we focused on the first impressions made by a number of British travelers and officials about the emirate, its cities and dependencies, such as: David Seton, Vincenzo Morezi, James Wire Buckingham, George Barnes Brooks , James Raymond Wollstead.

"The Journey and the Traveler"
The second chapter dealt with “The Journey and the Travelers”, and reviewed the biography of the traveler William Belgrave, his career and his journey, and his most prominent stations to reach Sharjah, where he landed in 1863 AD, and began to wander around the place, writing his impressions of him, documenting in his monitoring various and important aspects of the lifestyles that It was prevalent during the second half of the nineteenth century AD, and the author talked about the most prominent criticisms leveled at the trip and its content, reviewing the opinions of travelers and researchers who refuted Belgrave's information, especially what related to it in Riyadh, Al-Ahsa and Qatif .. Among them: John Philby and Wilfred Blunt,Miles, SB, Lawrence, TE. He also gave the opinions of travelers who praised the trip, and considered it a clear and great breakthrough in the history of European exploration, such as Petram Thomas and Samuel Zwemer. Historical, and how to rely on it as a historical source.

Belgrave in Sharjah
The third chapter talks about Belgrave in Sharjah, in which the author deals with the first moments of the travelers’ arrival at the port of Sharjah, the features of the coast, the position of the British representative in Sharjah (Haji Yaqoub bin Bashir), and the landmarks of defensive, religious, civil and commercial architecture, such as towers, forts, castles, fences, mosques and houses. And the markets, as mentioned in Belgrave’s journey, with additions, clarifications and explanations that we provided in their place, then we moved with the travelers to describe the atmosphere, clothes, fashion, and the population, their nature, gait, colors and charm, then he went to some of the colloquial language used in welcoming, and some of the phenomena that drew Belgrave’s attention During his stay in Sharjah.

Knowing the old building style and its components
The observations of this traveler are of great importance in knowing the pattern of the old building and its components, although they are not without errors that need to be corrected, including that the houses built from palm fronds were not for the purpose of renting to fishermen and sailors, as Belgrave mentioned, but most of them, if not All of them are permanent homes for the residents, and they represent most of the houses of the emirate; The houses built of mud were for the well-to-do groups of the population, while the poor groups lived in houses made of fronds. He also reported inaccurate information about Oman.

The author relied on a wealth of historical and geographical sources and references. To compare the historical and heritage material included in the aforementioned travel books, especially Belgrave’s journey, the subject of the study, and took the method of comparison and investigation based on the historical writings of His Highness Sheikh Dr. Sultan bin Muhammad Al Qasimi, Member of the Supreme Council and Ruler of Sharjah, may God protect him, as it is considered the most reliable and correct, with the aim of ensuring The correctness of the information and observations presented.

An ongoing historical series
The author points out that this work represents, in fact, a link in a series of continuous historical episodes, through which he looks forward to completing an integrated project on the Emirate of Sharjah and its cities, by monitoring the manifestations of its presence in Arab and Western sources, with the aim of documenting the image of the emirate in ancient and modern sources, and exploring the features And the features of that image, and what it holds or entails of historical value of its peer, to supplement the Emirati and Arab library with topics that are still devoid of study, research and documentation, and to make it available to researchers to draw from its rich source.

This study aims to determine the importance of this trip, and to know the extent to which it can be considered a reliable and reliable historical source, and to monitor the manifestations of the image of Sharjah and its cities, and the most prominent traveler stations in it, where he landed in 1863 AD, and began to wander around the place, and write his impressions about him, He documented in his monitoring of various important aspects of the lifestyles that prevailed during the second half of the nineteenth century AD, because of their role in knowing the pattern of the old building and its components, and other things that we will explain in its places.