The Sharjah National Group was established in 1998, while officially declared in 2011 under the directives of His Highness Sheikh Dr. Sultan bin Mohammed Al Qasimi, Supreme Council Member and Ruler of Sharjah, the patron of culture and heritage. The ensemble has played leading and important roles in the promotion of the UAE heritage in most forums and cultural weeks around the world; especially those associated with visits of His Highness the Ruler of Sharjah to cultural activities abroad to introduce the world to the cultural heritage and folklore of the UAE. It participates in various events organized in the emirate of Sharjah and in a number of festivals inside and outside the UAE, in addition to representing all local departments in the national and religious occasions and holidays. The ensemble performs the UAE folklore arts, such as Al Ayyala, Al Ahal, Al Harbeya, Ayyalat Al Ain, Al Habban, Al Noban, Al Liwa, Madaima, and various folk arts of marine arts. 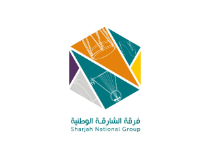